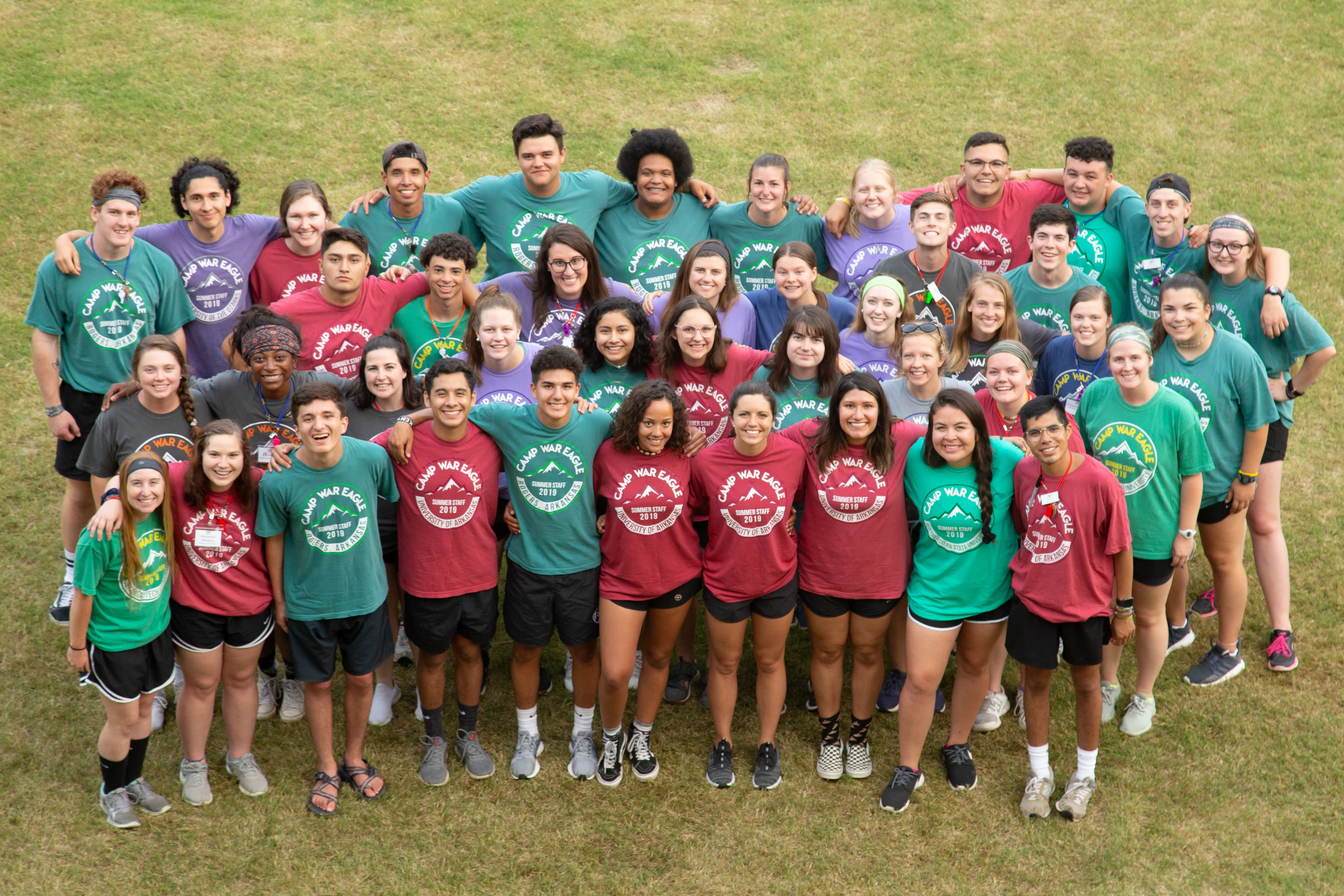 Executive Director, Sam and his wife, Susan, in addition to their responsibilities at Camp War Eagle, are owners of Incomparable Camp Ozark. The two have dedicated their lives to serving today's youth through the incomparable experience that is Camp Ozark, and now wish to share that same experience with the youth in Northwest Arkansas. Sam first came to Camp Ozark in 1951 at the age of three with his family. He later spent five summers as a camper and six years as a counselor at Ozark. A former baseball player and yell leader at Texas A&M, Sam's biggest asset is that he has experienced Camp Ozark from every angle - camper, counselor, staff member, parent and owner - and is able to translate these experiences into the development of an amazing program at War Eagle. Sam and Susan have three children - Scott (and his wife Secily), Chris (and his wife Ceci), and Angela (and her husband Stephan). In addition, they have several beautiful grandchildren.

Advising Director, Pete is a very important and special component of Camp War Eagle. He functions currently as an advisor to camp operations and the facility team. Having served Camp Ozark in various capacities since 1991, Pete helped with the design and construction of Camp War Eagle. Pete and his wife, Kristin, have three children: Hailey, Aaron and Rachel.

Operating Director, Leslie ensures that all departments and functions of camp are running safely, efficiently and smoothly. As a proud Oklahoma State alumn and mighty Condor, she loves sports, competition, and has meticulous attention to detail. Leslie started her camp career as a staff member at Incomparable Camp Ozark where she spent four summers and met her husband, Darrick. After a short career as a math teacher in Fayetteville, Arkansas, Leslie and Darrick transitioned to Camp War Eagle as two of the inaugural assistant directors in 2005. The bulk of her career at camp involved human resources and the oversight of summer staff recruiting and training. She still holds a deep passion for summer staff and the relationships that are built while serving at camp. Leslie and Darrick have a daughter, Addison, and a son, Dez.

Follow-up Operating Director, Andy and his wife, Whitney, believe wholeheartedly in the mission of Camp War Eagle in northwest Arkansas. Andy graduated form John Brown University with a degree in youth ministry in 2008, and he and Whitney have two children, Zyan and Zaydee. Andy is always smiling, loves to build things around the house, and once had a beagle named "Camper".

Associate Director Facilities, Eugene grew up in Rogers where he played soccer and ran cross country. After playing soccer for the University of Central Arkansas and ultimately graduating from John Brown University, he was inspired by Camp War Eagle's mission and once presented with the opportunity, joined the team in 2018. He oversee Facilities and enjoys the challenge of maintaining our beautiful camp throughout the year. Eugene and his wife, Karen, have one son, Maddox.

Senior Associate Director Administration, Penny came to Camp War Eagle from northern Colorado in 2008. Initially, her passion for horses and kids was a natural fit for the horse program, and now she has grown into an administrative role (with an occasional trail ride). Penny and her husband, Charli, have one son, Tristan.

Associate Director Program, Darrick is a valuable asset to Camp War Eagle and directs the camp program team. He brings innovation and fresh ideas every year to the programming of Camp War Eagle. Darrick loves to fish in his spare time, as well as spend time with his wife, Leslie, and their children, Addison and Dez.

Associate Director Day Camps, Greg discovered his calling to work with kids full time while working at Camp Ozark. After changing majors, he taught high school and coached for 8 years in northwest Arkansas before deciding to continue his passion of working with kids by coming on full time here at Camp War Eagle. Greg shares his enthusiasm and love for children with his wife Brittney, who is an elementary teacher here in northwest Arkansas. Both are graduates of the University of Arkansas and are committed to the positive impact Camp War Eagle will have on NWA's children. Greg and Brittney have four boys, Jackson, Owen, Grayson and Mason.

Associate Director Human Resources, Dana began her career at Camp War Eagle in 2015 after moving here from California. Dana enjoys being able to interact and serve all of the year-round staff of camp and aims to make their work life more enjoyable. Dana and her husband, Mike, have three children: Connor, Abigail and Taylor.

Associate Director Strategic Planning, Lyndsay is responsible for evaluating and maintaining a healthy organizational culture by focusing on the well-being and overall efficiency of our people and the organization as a whole. She takes the mission and vision of the organization and helps put processes in place to ensure excellence in every area. Lyndsay has a long history with Camp War Eagle. She began working as a summer staff member in 2007 and was hired full-time in 2010 as a staff recruiter and assistant program director after graduating from Oklahoma State University. After a brief time away from Camp War Eagle working for another non-profit, she returned in the new role that she loves. Lyndsay and her husband, Richard, live in Fayetteville with their two children, Laney Grace and Palmer.

Associate Director Summer Staff Recruiting, Sarah spends most of her year overseeing summer staff recruitment at over 40 universities in the surrounding states.  In the summer, Sarah manages our summer staff team by helping train, support and hold a standard of excellence with them. Sarah is married to Justin Pianalto and together they have three children, Aiden, Hallie and Paige.

Associate Director Health & Wellness, Traci grew up in Arkansas and has a passion for camp nursing and camp's mission for all children in northwest Arkansas. After receiving her Bachelor of Science in Nursing from Arkansas State University, she has worked as a registered nurse for over 20 years and is currently on staff at Arkansas Children's Hospital Northwest. She joined camp in 2009 and oversees health, nutrition and camp parent programs. Traci and her husband, Andy, enjoy camping and time on the lake with their four children: Drew, Olivia, Victoria and Preston.

OUR AMAZING SUMMER STAFF IS AT THE HEART OF THE WAR EAGLE EXPERIENCE.

Every summer, Camp War Eagle employs over 400 of the finest college-aged young people anywhere as members of our Summer Staff. Camp War Eagle recruits summer staff from over 20 colleges and universities, with recruitment beginning in mid-October and continuing through February and March. If you are interested in finding out more about this exciting, challenging and rewarding summer opportunity, please see our section regarding

This may take up to 2 minutes. Please don't click the back button or refresh the page.

1. Take a picture of each page of your camper's forms using your phone or scanner.

2. Email the pictures to your computer.

3. Open the pictures and click print, select "Save as PDF"

4. Save the file to your desktop and upload the document from your Camp War Eagle dashboard.

1. Take a picture of each page of your camper's forms using your phone or scanner.

2. Email the pictures to your computer.

3. Open the pictures and click print, select "Save as PDF"

4. Save the file to your desktop and upload the document from your Camp War Eagle dashboard.

We highly encourage you to contact email recipients to ensure that they have received the Camp War Eagle Qualification Request and agree to completing it.